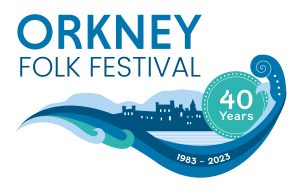 Orkney Folk Festival is launching a new supporter scheme, Orkney Friends, ahead of the 2023 event, giving festival fans the opportunity to play an important part in its continued success.

As a charity, and entirely volunteer run event, the festival relies on the generosity of supporters and sponsors to produce a varied programme of visiting and local artists each year.

Over the years thousands of people have demonstrated their support by being members of the annual Patronage or year-round Patron Plus schemes in return for a range of exclusive benefits.

While this adds to people’s festival experiences and helps raise crucial funds to keep the event running, customer feedback has...

The first wave of artists set to appear at the 2023 Orkney Folk Festival has just been announced, with 24 acts from around...

Ahead of our fortieth anniversary in 2023, the Orkney Folk Festival has recently welcomed a new festival producer – with responsibility for the...

After three long years, the Orkney Folk Festival returns to a full-scale live event this weekend, and in triumphant style – breaking all...