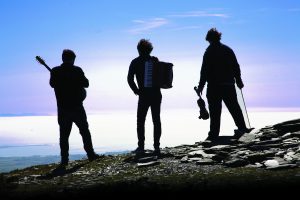 An award winning trio with a knockout, big band sound much more than the sum of their parts, Barrule elevates the music of the Isle of Man to a new level of performance and musicianship – and are the first Manx act to ever perform at the Orkney Folk Festival.

A fusion of three distinct musical forces – Mabon front-man and accordion wizard Jamie Smith, gifted fiddle-player Tomas Callister and versatile accompanist Adam Rhodes (Mabon) on bouzouki – Barrule's fresh approach to traditional Manx music evokes an atmosphere that reflects the diverse natural beauty of the island: from rousing marches, jigs and reels to sorrowful slow airs and beautiful songs sung in both English and the Manx Gaelic language. While sharing common ground with its Celtic cousins, as well as the English tradition, Manx music has retained its own particular and inherent Manxness; stories are told of ancient Celtic Gods, of unrequited love, and of the toils of island life.

Formed in 2012 – and named after a summit where, legend has it, the Celtic God Manannan Mac Lir stalked his fortress – Barrule’s three legs have hit the ground running. Major festival appearances include Celtic Connections, WOMAD, Sidmouth Folk Week, Festival Interceltique de Lorient and Australia’s National Celtic Festival, whilst their eponymous debut album won many plaudits, including Best Debut in the Spiral Earth awards 2014.

The trio’s second album – released in April 2015 – promises much more from their rich, yet, within the wider folk scene, under-celebrated tradition.