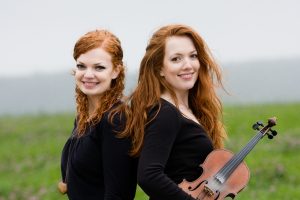 Coming from a long line of Cape Breton musicians – and having been immersed in their native traditional music from day one – it was only natural that Dawn and Margie Beaton would follow in their family’s footsteps. The Mabou sisters took their first lessons in both stepdancing and playing the fiddle at just four and six years old, and are now an award-winning, internationally renowned duo.

In recent years, the sisters have been invited to perform in China, Brazil, Scotland, Ireland, England, Wales, France, central Canada and the United States to perform. In 2011, Dawn and Margie were also received a Music Nova Scotia nomination and an East Coast Music Award win for their first recording, Taste of Gaelic.

The Beaton Sisters’ Band sees Dawn and Margie joined by two more Cape Bretoners – piano extraordinaire, Jason Roach, from Cheticamp, and fellow Mabou native, Kenneth MacKenzie, on pipes and fiddle – allowing them to occasionally turn their hands to the banjo and mandolin, showcasing a true multi-instrumental taste of Cape Breton.