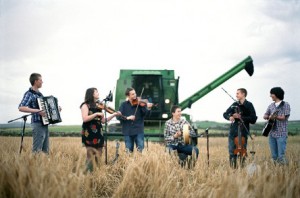 Broken Strings' return to the Orkney Folk Festival in 2014 marks four years since their victory at our very own Open Stage, and since then their fresh, energetic approach to traditional music has seen them firmly established on the Orcadian folk scene.

As the youngest group ever to win a coveted Danny Kyle Award at the Celtic Connections festival, the band has always displayed a musicality well beyond their years. The multi-instrumentalists effortlessly fuse their musical roots and early influences – from the rich Orcadian traditions - with the drive of modern folk to create their unique, full-on yet sympathetic, sound.

Confirming the group’s status as much more than simply “good for their age”, career highlights include playing alongside the Battlefield Band, opening Glasgow’s Old Fruitmarket for Irish mavericks Four Men and a Dog, and performing at Orkney's welcoming ceremony for the Olympic Torch.