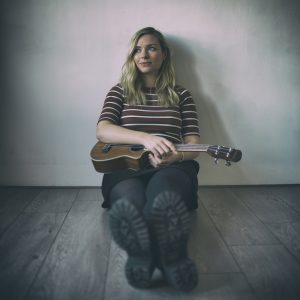 Folksinger, songwriter and ukulele player Claire Hastings has made a name for herself on the folk scene since winning BBC Young Traditional Musician of the Year in 2015.

Originally from Dumfries and Galloway, Claire moved to Glasgow to study at the prestigious Conservatoire of Scotland, achieving a first-class honours degree in Scottish Music.

Since then she has toured extensively both as a solo artist and with her band, and appeared at internationally renowned folk festivals such as Celtic Connections and Festival Interceltique de Lorient. Standout performances include BBC’s Friday Night is Music Night alongside Lulu and Jamie Cullum, on BBC One’s Hogmanay 2021 performing Auld Lang Syne, and as a soloist with the Scottish Symphony Orchestra, Randers Chamber Orchestra and Aarhus Jazz Orchestra.

Claire has a strong ability to portray a story through song, and is known for her varied repertoire of traditional, contemporary and original songs as demonstrated in highly regarded albums, Between River and Railway and Those Who Roam. Tracks from both albums have had airplay on radio shows including The Folk Show (BBC Radio 2), and The Afternoon Show, Travelling Folk and Take the Floor (BBC Radio Scotland).

Claire also shares her passion for music and songwriting through various teaching projects and has worked with Fèis Rois, Survivor Arts, Nevis Ensemble, Live Music Now Scotland and Scottish Culture and Traditions amongst others. She also runs the very popular Claire’s Music Club; music workshops for under 5s and their families.