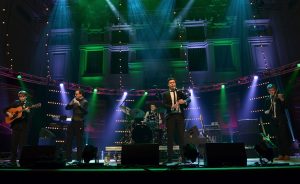 Since triumphantly bursting on to the folk scene at Celtic Connections 2015, Dosca - the energetic five piece ensemble of bagpipes, flute, guitar, bass and drums - are quickly making a name for themselves among some of Scotland's finest folk acts.

With influences from Scottish and Irish folk, as well as a hint of jazz, the band’s self-titled debut EP was launched early in 2015, leading them on to a number of prominent appearances throughout Scotland and further afield – including the MG Alba Scots Trad Music Awards, Edinbugh’s Usher Hall, Piping Live! in Glasgow, and a return to Celtic Connections in 2016.

They have also made successful ventures to mainland Europe, none less so than when rapturously received at the Schots Weekend in Belgium, in September last year. Collectively the band’s members also bring a wealth of touring experience (whilst still students), having undertaken tours to Germany, the Netherlands, Switzerland and Brazil.

"Dosca are taking the party up a few notches!" - Folk Radio UK

"A firm rhythm section, tight solos, vivid arrangements... you can feel your heart starting to race with this band. They are now unquestioningly ready to conquer... starting with your bodies and souls!" - Schots Weekend Festival, Belgium