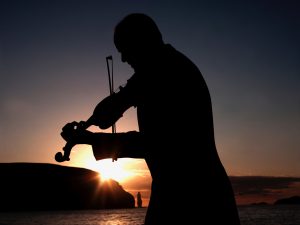 One of the most accomplished and authentic interpreters of traditional Highland music, Duncan Chisholm’s music is elegant, trancelike and tender, laced with strokes of genius. The correlation between music and the natural world lies at the heart of what inspires Duncan, and the elements that make the Highlands of Scotland such a unique canvas have been the main force and motivation behind his music in recent years.

Duncan has enjoyed many Orkney Folk Festival appearances with other musicians and bands, however his performances at the 2018 festival will be the first presentation of music from his solo suite of recordings.

The set list will present music from Duncan’s new album – Sandwood – which is inspired by the bay that rightfully lays claim to hold the finest yet least accessible beach in Scotland. Sandwood is situated within the far reaches of the north west coast of Sutherland, and is a natural masterpiece; a true paradise that sits within a basin of peatlands waiting to be discovered by those willing to trek wild. Two years of imagining, writing and production have resulted in Duncan capturing this wild place musically and making it the focus of his latest album of fiddle music.

Duncan will be accompanied in Orkney by his extended band line-up, including Jarlath Henderson, Su-a Lee, Anna Massie, Hamish Napier and Patsy Reid. This assembly of musical masterminds individually represent some of the finest talents on the traditional and classical music scene and collectively, with Duncan, present the new sound of traditional Scotland.