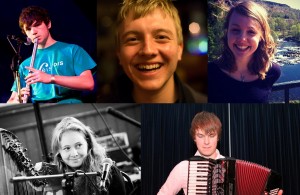 Having spent last summer touring nationally for six weeks – including a brief, but well received sojourn to the industry-leading Cambridge Folk Festival – this group of five exceptionally talented young musicians from across Scotland, featuring Orkney’s own Eric Linklater, have reunited to perform for the Orkney Folk Festival.

Since 2000, Fèis Rois - a Ross-shire based traditional music organisation which delivers a year round programme of music tuition and activity across Scotland – have been programming annual summer Ceilidh Trails, designed as a professional development opportunity for young musicians who are considering a career in traditional music. The programme has toured from North Uist to the Borders, and Orkney to Dumfries and Galloway, and has seen many former participants go on to carve out successful careers for themselves in the industry.

One of the two 2013 touring bands, this ensemble features Eric alongside two Perthshire musicians - singer and keyboard player Kim Carnie, and accordionist and guitarist Jack McRobbie - Mischa Macpherson, a multi-instrumentalist and singer from Lewis, in the Outer Hebrides, and Conal McDonagh, a piper and whistle player, from Poolewe, in Wester Ross.