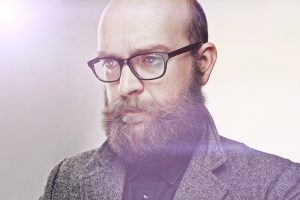 As defined in the title of his 2015 solo debut - VIP: Very Interesting Persons - (No.2 in the Daily Telegraph top folk albums that year), Scottish singer-songwriter Findlay Napier categorically commands musical VIP status. A supreme storyteller with a magpie-minded imagination and magnificent voice, Napier is one of the most highly regarded performers and creative forces on the UK folk scene.

His new album, Glasgow, continues his writing collaboration with Boo Hewerdine, and combines freshly-penned originals with classics and rarities from the city’s vast and colourful ballad canon, by authors as diverse as Hamish Imlach and The Blue Nile - altogether forming an extended musical love-letter to Scotland’s metropolis, and Napier’s adopted hometown.

Napier’s own songcraft vibrantly reflects this rich stylistic melting-pot – one he’s played no small part in creating too; especially the cross-fertilisation between Glasgow’s folk and indie communities, as both co-host of a long-running open-mic night, and promoter of the decade-old Hazy Recollections concert series.

In 2016, Napier launched the Glasgow Songwriting Festival - a weekend of workshops and performances which has sold out both its inaugural and 2017 outings - whilst he also finds time to tour with the acclaimed contemporary protest-song showcase, Shake the Chains.

★★★★ “Napier is a warm, witty and engaging singer with a real gift for melody"
The Sunday Express