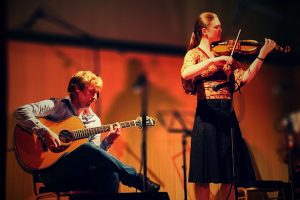 Local musicians, Fiona Driver and Graham Simpson are a long-established fiddle and guitar duo from Orkney. This year marks Fiona and Graham’s tenth Orkney Folk Festival apearance, where they will be showcasing some new material to mark the anniversary.

Popular throughout the isles and further afield - over the last year, they have playing at various festivals in Scotland, including the TMSA’s Northern Streams and the Braemar Arts Festival, alongside many popular appearances at home - they are known for playing many varied selections of tunes from around the world, alongside Fiona’s award-winning compositions.

A prolific tunesmith, Fiona currently has over 200 tunes written (and counting…!), showcased in her self-titled tune book and across her two solo albums.

“Fiona Driver has matured into a powerful fiddler and skilled composer with a distinctive style: not completely Orkney, but totally captivating.” - Alex Monaghan, Folk World