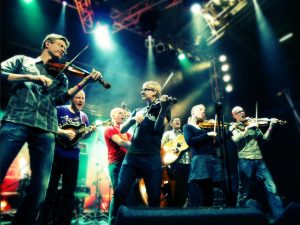 The leading act of the Nordic fiddle scene, Frigg features the premier talents of a generation of Finnish folk musicians. These seven players draw their strength first and foremost from the music of their homeland, incorporating many other influences from their worldwide travels to create their own genre - Nordgrass - a joyful mix of Nordic folk and American bluegrass.

A smash at many of the world's major folk festivals - including the Cambridge Folk Festival, Rainforest World Music Festival, Celtic Connections and WOMADelaide - the global world music media have also featured Frigg extensively. Their latest album, Polka V, was selected as Finland's Folk Album of the Year, and nominated for the prestigious Teosto Prize, awarded annually by Finnish composers, underlining their commitment to self-penned material.