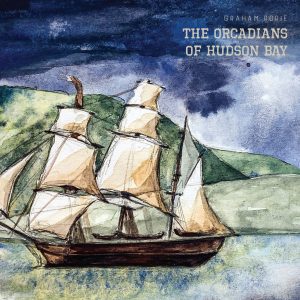 An award-winning Orcadian fiddle and mandolin player, Graham Rorie presents his debut solo offering, The Orcadians of Hudson Bay; a suite of self-composed music, inspired by his fellow Orcadians who travelled to The Hudson’s Bay Company in Northern Canada to make their living in the fur industry during the 18th and 19th centuries.

The port of Stromness, in Orkney’s West Mainland, was the last stop for ships leaving Britain before they crossed the Atlantic Ocean. Orcadians, who were used to living and working in a harsh climate at home, became popular employees of the company, and, by 1800, 79% of The Hudson’s Bay Company’s employees were from the isles.

The culmination of four years’ research and writing, spurred by Graham’s lifelong fascination with the historical and cultural links between Orkney and Canada, The Orcadians of Hudson Bay debuted to a sellout crowd at Celtic Connections 2020, and makes its way ‘home’ to the Orkney Folk Festival 2022.

The album accompanying the project - which features stunning artwork by Orkney musician and artist, Jennifer Austin - was released during last year's Virtually Orkney Folk Festival. An acclaimed debut, it was shortlisted for ‘Original Work of The Year’ at the BBC Alba Scots Trad Music Awards 2020.