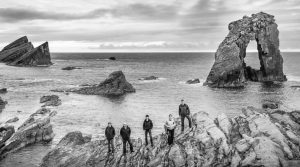 Boasting some of Shetland’s finest folk musicians, Haltadans came together three years ago to give a new lease of life to long-forgotten tunes from the archives of the Shetland fiddle tradition.

Since their debut at the 2012 Shetland Folk Festival, Maurice Henderson, Ewen Thomson, Lois Nicol, Grant Nicol and John Clark have been performing regularly throughout their home isles, including in rural halls on Fair Isle, Foula and Fetlar.

Inspired by their travels, they have recently introduced their own compositions to their sets, complementing age-old tunes. Whilst mindful of their traditional roots, they approach music old and new in a fresh, yet sensitive manner. Layered and intricate harmonies and arrangements sit alongside fired-up dance tunes and fresh new compositions, to form a stylish and entertaining performance.

The band has recently produced a five track EP, which was released just before Christmas 2014 to great acclaim.