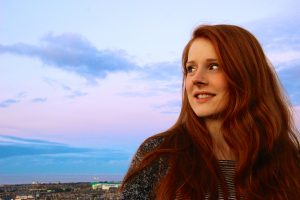 Although only introduced to the Scottish folk scene a few years ago, Hannah Rarity's spellbinding voice, warm, genuine stage presence and thoughtful interpretations of material both new and old have seen her perform in a number of varied and exciting locations including Brazil, Spain, Eastern Europe and around the UK.

A student of the Royal Conservatoire of Scotland, Hannah has twice appeared as a soloist with Phil Cunningham, Aly Bain and the Royal Scottish National Orchestra in the Glasgow Royal Concert Hall, and features on the soundtrack to the short film Whistle My Lad, directed by Richard Burke, again with the RSNO. Most recently, she performed as a soloist on BBC1’s Hogmanay Live over New Year 2014/15 with Blazin’ Fiddles, to great acclaim.

Hannah will be joined on guitar by Innes White, who visited the festival in 2014 with both the Mischa Macpherson Trio and Feis Rois Ceilidh Trail. An accomplished guitarist, mandolin player, pianist and singer, Innes has performed extensively throughout Scotland and internationally. He has previously played with luminaries such as Michael McGoldrick, Karen Matheson, Carlos Nunez and Patsy Reid, and, alongside renowned musician and composer Donald Shaw, has also recorded on the soundtracks of BBC Alba’s Katie Morag and Bannan.