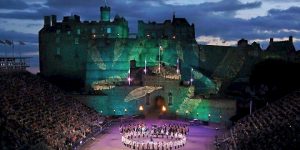 Shetland's county fiddle group, Hjaltibonhoga were formed in 2014 to represent our northerly neighbour islands at the Royal Edinburgh Military Tattoo.

The all-fiddle troupe can sometimes include up to 40 players at a time and boast a repertoire both rich in traditional Shetland tunes as well as titles from further afield.

It's testament to both the continued widespread fiddling talent that Shetland is renowned for, as well as the logistical framework from group leader, Margaret Robertson, that they were able to maintain such an uncompromising standard throughout their initial four-week run of shows. In all, in excess of 60 performers took part in their Edinburgh debut, and whilst the group contains some of the isles’ most widely acclaimed players, it has also seen many former musicians return to public performance – such is Hjaltibonhoga's draw and widespread appeal.

Since performing to great acclaim on their Tattoo debut, they were invited to return in 2015, as well as to Australia and New Zealand in early 2016, as part of the Overseas Tattoo tour.