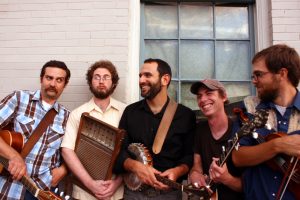 Making their seventh UK tour, but first visit to Orkney, Virginian livewires The Hot Seats are simultaneously hard to classify and instantly identifiable. Appalachian old-time blends with left of centre bluegrass, the rhythm of old time, the jerky bounce of ragtime, and the swagger of good old rock and roll.

While striving to push tradition forward, the band takes great pride in their ability to play within a tradition style as well as without. When it's bluegrass, they bring you back to the 1960′s era of Flatt and Scruggs or Jimmy Martin; when it’s old-time, they channel the Camp Creek Boys; when it’s time for a bit of satire, it’s the images of Frank Zappa or the Fugs towards which they gravitate. Ultimately, The Hot Seats are most concerned with making the music that they want to hear, and playing in the manner that is most entertaining to themselves - the fact that audiences and critics alike have embraced it is, in their words, a wonderful coincidence.

On their UK travels, the band has wowed festivals including Celtic Connections, HebCelt, Shetland, and the Edinburgh Festival Fringe (plus many more), where they picked up a Herald Angel award following a sell-out run at The Famous Spiegeltent.