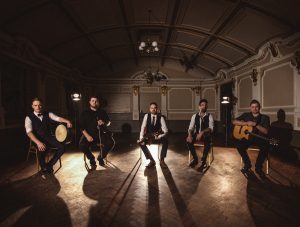 With a line-up featuring members of Mànran, RURA, Talisk and Barrule, and a heavyweight collective haul of top prizes – including the 2016 BBC Radio Scotland Young Traditional Musician of the Year, a BBC Radio 2 Young Folk Award, nine All-Ireland and eight All-Britain titles – the group’s formation embodies a personal reconnection with its members’ formative years, dating back long before their recent camaraderie around Glasgow’s justly celebrated session scene.

Adam Brown (bodhrán), Adam Rhodes (bouzouki), Mohsen Amini (concertina), Ryan Murphy (uilleann pipes) and Tomás Callister (fiddle) share a strong background in Irish music – although only Murphy actually hails from Ireland; Rhodes and Callister are from the Isle of Man, whilst Amini is a Glasgow native, and Brown originally from Suffolk – and it is these foundations which underpin many of Ímar’s distinctive qualities, in both instrumentation and material. Ímar’s unmistakable synergy, however, centres on the overlapping cultural heritage between Scotland, Ireland and the Isle of Man. All three places once shared the same Gaelic language, and a similar, clearly potent, kinship endures between their musical traditions.

Unleashed to the world during Celtic Connections 2016, their debut video, L’Air Mignonne, was a viral smash, viewed in excess of 300,000 times – whilst their first year tour credits included the opening set at that year’s Cambridge Folk Festival (technically, the band’s first billed gig – a plaudit surely amongst as rare as they come) and headlining a stage at Belgium’s Dranouter Festival just a week later.

Their debut album, Afterlight was then launched at Celtic Connections 2017 in the Glasgow Royal Concert Hall, kicking off tours throughout Scotland, England and the Isle of Man, as well as festival visits to Ireland, Denmark – where they were one of the first six names announced for the 2017 outing of the legendary Tønder Festival – and Cape Breton’s Celtic Colours. Other main stage slots included HebCelt, Underneath the Stars, Wickham and the Sidmouth FolkWeek.