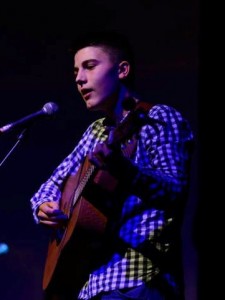 Appearing as a soloist, for the first time at the festival, Orcadian teenager James Nicolson is no stranger to regular audiences. The young singer, guitarist and piano player, from Kirkwall, has appeared at the festival since the tender age of just 12, alongside his sister, Maggie.

Together, they opened for Eddi Reader at the 2012 Orkney Folk Festival, and were later invited, at the behest of the songstress herself, to do the same in the 1900-capacity Edinburgh Festival Theatre, as part of a 20-date sold-out tour. The pair have also delighted audiences at Glasgow's Celtic Connections festival.

Whilst continuing his studies, James remains busy throughout the county, entertaining at concerts and community events.