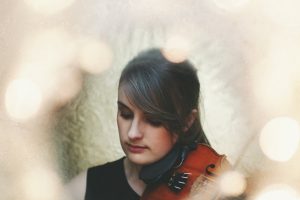 Having played at countless Orkney Folk Festivals in her youth - with Hadhirgaan, the Orkney Traditional Music Project, and Skalder - local fiddler Louise Bichan most recently appeared at the festival just last year, presenting the initial work from her transatlantic project retracing the travels of her grandmother, Margaret Tait.

In 1950, aged 25, Margaret , from Quoyburray, set out from Orkney alone, travelling across the Atlantic and right across Canada, taking time out to consider her future. In 2013, also aged 25, fiddle player and photographer Louise Bichan set out on her own journey, retracing the steps of her grandmother, in a bid to fill in gaps in Margaret’s story created by the disappearance of a crucial volume of her diaries.

Louise now presents a suite of music inspired by Margaret’s memoirs, the memories of elderly Canadian cousins who she tracked down and interviewed, priceless photographs which remain from her grandmother’s trip, and new images from her own voyage.

In a full band show, on Thursday in the Orphir hall, Louise is joined by Jen Austin, on piano, fiddler and guitarist, Mike Vass, Euan Burton on double bass, cellist Su-a Lee, and pecussionist Signy Jakobsdottir.