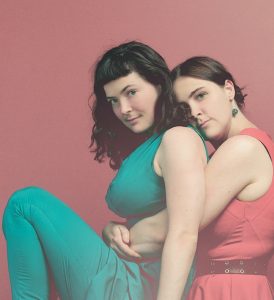 Melbourne-based The Maes (formerly The Mae Trio) are a multi award-winning, contemporary folk act featuring sisters Maggie and Elsie Rigby  - two of Australia’s most talented young singers, songwriters and performers - in a spine-tingling union of sumptuous harmonies atop bluegrass-tinged instrumentals.

Maggie (banjo, ukulele, guitar and vocals) and Elsie (fiddle, ukulele and vocals) grew up surrounded by music, playing in their family band and spending much of their childhoods attending music festivals, camps and choir rehearsals.

As The Mae Trio, with cellist Anita Hillman, their celebrated debut album, Housewarming brought them to audiences throughout Australia, Canada, the USA, Europe and the U.K. - including a performance in Glasgow’s 13,000-capacity SSE Hydro Arena at Celtic Connections 2014.

Their sophomore record, Take Care Take Cover, recorded in Nashville under the production of Erick Jaskowiak (Crooked Still, Tim O’Brien, Darrell Scott, The Waifs), was released in April 2017 to wide critical acclaim, and accompanied by extensive touring throughout North America, Australia and the U.K. Wherever their path may lead, though, audiences never fail to be entranced by the trio’s compelling vocals, beautiful arrangements and insightful collection of songs.

“The Mae Trio songs are powerful, the vocal harmonies soar, and their own instrumental prowess is impressive” Penguin Eggs

"Located at a crossroads where Australian, English and American folk traditions meet, The Mae Trio are in the midst of creating something unique and very much their own" Songlines