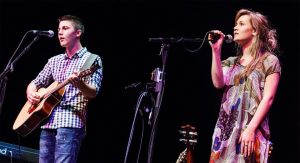 Sister and brother Maggie and James Nicolson create a spellbinding vocal harmony duo that has, in just a few short years, amassed some impressive credits.

Having opened the stage for Eddi Reader at the 2012 Orkney Folk Festival - a slot awarded to the Orcadian siblings after being placed runners up in the 2011 outing of the festival's Open Stage - they were later invited, at the behest of the songstress herself, to do the same in the 1900-capacity Edinburgh Festival Theatre, as part of her 20-date sold-out autumn tour.

The pair have also delighted audiences at Glasgow's Celtic Connections festival, with their understated accompaniment of just guitar and piano, whilst in November 2012 they released their debut EP, Sib, to widespread praise. Whilst both continue their studies they remain busy throughout the county, entertaining at concerts and community events.

"[They] wowed the audience with their beautiful harmonies. Their performance had a maturity well beyond their years" - The Orcadian

"Maggie and James Nicolson are individual and very creative: they sing beautifully together." - Eddi Reader