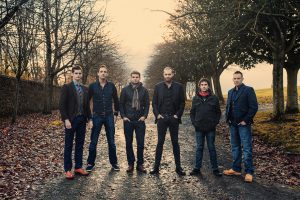 In just a few short years Mànran have become something of a phenomenon, bringing their unique blend of Gaelic and English, and traditional and contemporary, to audiences worldwide.

From seeing in New Years as house band on BBC Alba’s Hogmanay coverage, to sellout shows in many corners of the globe, an iTunes chart-topping debut single, a special performance at the London 2012 Olympics, two award-winning albums, penning an STV Appeal single, and opening for Runrig at the band’s fortieth anniversary celebration, the group’s career is an endless list of highlights.

Featuring Norrie MacIver, Gary Innes, Ewan Henderson, Ryan Murphy, Ross Saunders and Scott Mackay, Mànran began their journey into the traditional music sphere in 2010, when six friends used a powerful combination of Gaelic/English songs with accordion, fiddle, flute, guitar and a delicious mix of drum and bass to create an infectious and recognisable sound. Also the only band to use Highland and Uilleann pipes in one line-up, Mànran quickly began to cement themselves as one of the most exciting groups on the folk circuit.

With a relentless year-round touring schedule, legions of fans the world over, and multiple awards under their belts, the band are very much in a league of their own.