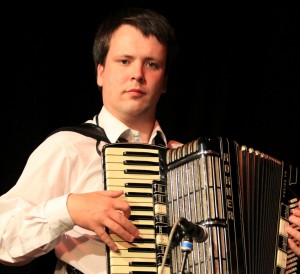 One of the Scottish country dance band scene’s most familiar faces, Matthew Maclennan is returning to Orkney this year with his own band in tow. Last seen at the festival in 2012, playing second accordion alongside Nicky McMichan, this time round he will front his four-piece band, featuring Dennis Morrison (piano), Neil Macgregor (drums) and Iain Anderson (fiddle).

A multi-award winner, Matthew has excelled on the accordion for a number of years. Just some of his accolades include: overall senior champion (2013, 2011, 2009); senior pipe music champion (2013, 2009, 2005), senior traditional accordion champion (2013); and the National Association of Accordion and Fiddle Clubs’ invitational accordion masters winner (2004-2006). He regularly plays throughout Scotland with his own band, and alongside others, and has racked up many appearances on Robbie Shepherd’s BBC Radio Scotland Take the Floor programme.

So too has Dennis played with many top bands over the years, both on radio and on stage – most notably with John Ellis and his Highland Country Band, and Colin Dewar and his Scottish Dance band, who he visited the Orkney Folk Festival with in 2005. A Thurso native, Neil Macgregor is known for playing with west coast ceilidh legends Skippinish, and has appeared at the Shetland Accordion and Fiddle Festival a number of times.