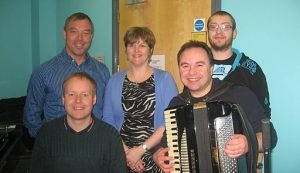 Michael Philip has been part of the Scottish dance band scene for three decades, having formed band in 1986. Following transitions in the 1990s to a contemporary ceilidh style, and then a showband covering pop, rock and ballads, as well as Scottish dances – a move which saw them tour throughout the world at corporate events, festivals, theatres and weddings – the band returned to their roots of being a Scottish country dance band in 2000, where they have remained since to great acclaim.

In the same year, Michael won the All Scotland Accordion Championship, and in 2006 they released their very well received – and aptly titled - album, Back on Track. The band’s return and successes were compounded in 2009, when they were nominated for Scottish Dance Band of the Year at the MG Alba Scots Trad Music Awards. The band has since broadcast for BBC Radio Scotland’s Take the Floor on numerous occasions, most recently in January 2014.

Whilst the band’s repertoire is deeply rooted in the traditional idiom, being a prolific composer in his own right, Michael’s individual and original style of composing has provided fresh and new material thus giving the band their unique style and sound.