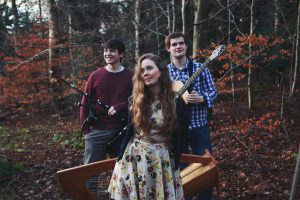 BBC Radio 2 Young Folk Award winners, The Mischa Macpherson Trio are a new Scottish outfit who – if the first few months of 2014 are anything to go by – look set to achieve great things. As well as their UK-wide title, presented in London’s Royal Albert Hall in February, the young Highlands and Islands band are also holders of a prestigious Danny Kyle Award, from the 2014 outing of Glasgow’s Celtic Connections festival.

A singer and clarsach player from Lewis, in the Outer Hebrides, Mischa is joined by guitarist Innes White, from Dingwall, and Conal McDonagh on pipes and whistles, who hails from Poolewe, in Wester Ross. All three musicians are graduates of the National Centre of Excellence in Traditional Music, in Plockton, however first met through the award-winning Fèis Rois programme. Through the organisation, the trio have toured in Germany, Romania, Ireland and Australia, as well as to leading UK folk festivals.

Having all grown up immersed in their regions’ distinctive culture, music, language and landscapes, they each discovered an enjoyment in making music at a very early age, and it is these influences that the trio now present, and to multi award-winning acclaim.

“They bring a rich vitality and passion to the traditional music they play. With musicianship like this the Gaelic tradition will continue to spread far and wide. A real joy to listen to!” (Folk Radio UK)

“In an age where production can embellish and exaggerate musical ability, it’s refreshing to hear honest music from understanding empathetic musicians. What the Mischa Macpherson Trio deliver is music from the marrow” (RTE)