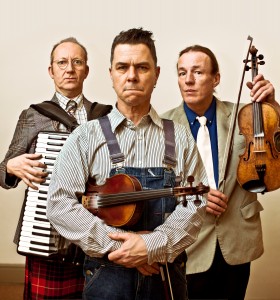 They’re back! But, sadly, for one last time…

As Orkney Folk Festival attendees in 2010 and 2013 will vouch, The New Rope String Band is very much in the league of “once seen, never forgotten”, if not a league of its own – however, after more than 25 years of spreading joy around the world, as both Old and New Rope, they have come to the end of their journey together. But, before these legendary folk-cabaret artistes go their separate ways, they are undertaking a farewell lap of honour; a celebratory extravaganza of their finest routines with some specially-created final flourishes. Frankly, we couldn’t say no.

Pete Challoner, Tim Dalling and Jock Tyldesley splice elements of circus, vaudeville, clowning, slapstick, contortionism and downright tomfoolery with acoustic music, in precision-honed, uproarious performances that have delighted audiences for a quarter of a century. For diehard audiences it's a chance to come along, laugh once more and say goodbye. For those who've never seen them, it’s your last chance to be part of something genius.

"They made me laugh until I cried, and played some great music. If the Queen could knight them or something, it would be a good idea."
Tim O’Brien