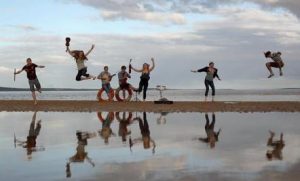 No Soond are marking their fifth anniversary at this year's festival, having formed for our Open Stage competition in 2011. Since then, the young band were placed within the top ten acts at the Danny Kyle awards at Celtic Connections 2012, have appeared at the Belladrum Tartan Heart Festival and performed throughout Orkney, including at the St. Magnus Festival alongside the world-renowned Norwegian chamber orchestra, the Trondheim Soloists.

With their debut album Stranded, being described as "a special CD which takes traditional folk music by the hand and leads it carefully up a new path", the band, fronted by four fiddles and with a rhythm section of acoustic guitar, bass and drum kit, bring a mix of self-penned tunes and tunes from all over the world and blend them together with a contemporary, upbeat twist.

No Soond’s members bring many influences to the table, from straight up traditional tunes to hard rock, dance, funk and jazz – feet-tapping guaranteed!