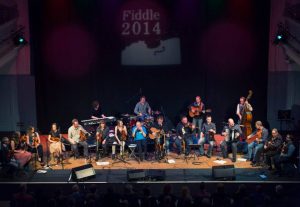 It seems hard to imagine an Orkney Folk Festival without an outing of The Gathering - such has been the overwhelmingly positive response to each of its incarnations - yet this year is just the fifth.

Showcasing several generations of these islands’ richly distinctive folk culture, the heralded venture brings together an expansive cast ranging from teenage rising stars to veteran stalwarts, all brought together in superb style by musical director and fiddler Douglas Montgomery. A first-of-its-kind amongst Orkney’s fertile musical landscape, The Gathering presents some cast members whose first meeting has been through the project – instantly illustrating its significance in both preserving and continuing the county’s vibrant musical heritage.

Having gathered considerable attention on home turf in 2011 and 2012, a bumper cast of 30 musicians assembled for its first UK mainland performance – in Glasgow’s legendary Old Fruitmarket, as part of the city’s Celtic Connections festival in February 2013 – before joining their northern cousins for a joint North Isles Gathering. In May 2013, musicians from both Orkney and Shetland joined to showcase both communities' vast musical heritages, for home and away gigs at both the Orkney and Shetland Folk Festivals.

Last year’s ‘Gathering showcased not only Orkney’s own rich folk culture, but also the connections that it has with others from across the Atlantic, with guest appearances from stateside and Canadian visitors.

This year's venture sees the project return home for a reprisal of Orkney Folk: The Fiddle Gathering, presenting a spotlight on Orkney's rich fiddling tradition - as originally curated for the 2014 Scots Fiddle Festival, at Edinburgh's Queen's Hall.

"The undisputed jewel in the crown [of the festival]...The Gathering emphatically foregrounded Orkney folk's greatness as musicians." - The Scotsman

"The energy on stage was electric. Judging by the faces of each performer, the enjoyment of the audience was also felt by those on stage."  - The Orcadian