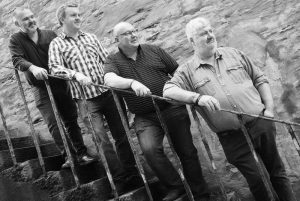 Peter Wood is one of Shetland's best accordion players and tutors, with a career spanning decades. Whilst his band was formed relatively recently, they have fast become favourites amongst the dance band scene - including right here in Orkney, where they return by very popular demand from both the 2019 and 2022 festivals.

To date they have released two successful CDs, with their debut winning the best new release of 2016 at the National Association of Accordion and Fiddle Clubs. They were also nominated for Dance Band of the Year at the MG Alba Scots Trad Music Awards the same year.

With Peter leading on accordion, alongside Andy Kain on fiddle, guitarist Arthur Nicolson, and Graham Jamieson on drums, the band play a mixture of traditional, continental, Scandinavian, swing and country music - once again set to be a sure fire hit with festival dancers.