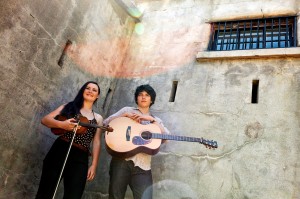 With deep Asturian and Breton roots, Canadian brother and sister duo, Qristina and Quinn Bachand, have quickly emerged at the top of the Canadian roots music scene, receiving innumerable award nominations and titles. This powerhouse duo has a musical bond that only siblings can share, reminiscent of the connections displayed by other Canadian family groups such as Leahy, the Barra MacNeils or the Rankins. As such, audiences quickly fall in love with Qristina and Quinn.

Known for her expressive and passionate fiddling style, Qristina is a consummate performer. She effortlessly captivates her audience with a spirited performance that showcases not only her fiddling and vocal talents, but also her energy and love of Celtic music. With diverse musical talents and a bottomless pool of creativity, Quinn is recognised as the “Young Lion” of the Celtic guitar (Daniel Lapp) and “Canada's top Celtic guitarist” (Ashley MacIsaac). A gifted multi-instrumentalist and a creative player, Quinn adds a contemporary edge to traditional Celtic music; his unique harmonies, hard-driving strumming, inventive chord voicing and powerful rhythmic effects make even the most well-worn tunes seem new and exciting. An in-demand sideman, Quinn has also toured nationally and internationally performing with Canadian fiddling icons Ashley MacIsaac and Natalie MacMaster.

Together, Qristina and Quinn have released two critically acclaimed albums, "Relative Minors" (2008) and "Family" (2011) and will release their third in spring 2014. They have performed at major folk and Celtic festivals across Canada, the U.S. and Europe, and have been featured on national and international print, radio and television programs.