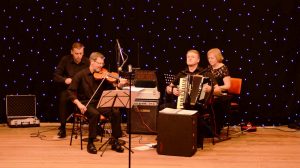 Whilst his family name comes from the Ukraine, Raymond is originally from the little village of Wallyford, just outside Edinburgh. Growing up surrounded by music, he first showed a gift for the accordion at just eight years old, when he was already performing at local shows and concerts.

Raymond is a hugely popular choice for sequence, ballroom and Scottish dancing events and classes, appearing at venues all over Scotland, England and even annual tours of Kobi, in Japan.

In 2012, Raymond was approached to form a Scottish Dance Band, to perform at the ‘Pride o’ the North’ Scottish showcase at Inverness’ Eden Court Theatre. Following the success of the show, it was inevitable that the band were to be more than a one off, and they recorded their first CD, Raising the Bar, in 2013. The album went on to receive a Box & Fiddle BAAFI nomination for ‘CD of the Year’ in 2014, coming runner up.

The band are in high demand at accordion and fiddle clubs, ceilidhs and weddings throughout the country, and were last seen in Orkney at the Orkney Accordion & Fiddle Club’s open night in August 2014.