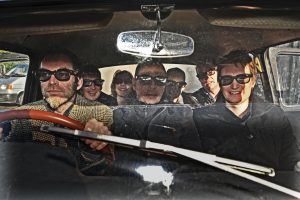 Scottish fiddle sensations, Session A9 have, in their fifteen year tenure, been described as “a Scottish super-group”, “the best band to have come out of Scotland in 100 years”, and “tighter than James Brown"; great praise indeed for a band formed through informal music sessions up and down the arterial Scottish road not far from many Orcadians’ hearts, the A9.

Featuring Charlie McKerron, Gordon Gunn, Kevin Henderson and Adam Sutherland on fiddle, backed by pianist Brian McAlpine, David “Chimp” Robertson on percussion, and Marc Clement on guitar and vocals, the group have undertaken many tours of Scotland and England, plus successful ventures into mainland Europe and the USA. As well as being highly revered players, the band’s members are also amongst the best tunesmiths in Scotland today, with their four albums featuring many self-penned tracks. Their first recording, What Road?, propelled the group towards national recognition and acclaim in 2003, followed by the outstanding Bottlenecks and Armbreakers, in 2008, recorded through group-sessions to emulate the feel of their live performances. A live CD followed in 2010, as well as their much-lauded eponymous record in 2012, their third studio album.

With gig credits including Glastonbury, Celtic Connections, Edinburgh’s Hogmanay and the Cambridge Folk Festival - as well as two previous Orkney Folk Festivals (in 2004 and 2011) - after just one listen, it’s easy to see how they are one one of Scotland's best-loved groups.