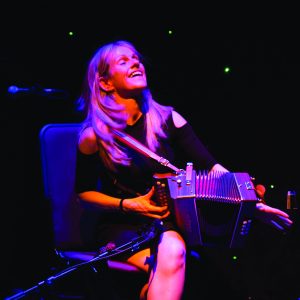 It is no stretch to say that Ireland’s Sharon Shannon has achieved legendary status throughout the world, making the much-maligned accordion officially ‘cool'.

Sharon’s back catalogue of collaborators speaks for itself - Steve Earle, Bono, The Waterboys, Sinead O’Connor, The Chieftains, Willie Nelson, Jackson Browne, Alison Krauss and Shane MacGowan – to name just a few, in a list that is testament to Sharon's versatility, as well as talent.

The genre-defying star has garnered multi-platinum album sales, and several number one albums, singles and DVDs in her home country. Her ‘best-of’ album, Galway Girl, went four-times platinum in Ireland, with the title track – featured in the award-winning Magners TV adverts – being the country's most downloaded song for two years running.

Sharon's music has been featured in several Hollywood movies and, on top of countless worldwide concert and festival tours, she has entertained two US Presidents; Clinton at the White House, and Obama in Dublin.

She also celebrates being the youngest ever recipient of the Meteor Lifetime Achievement Award.