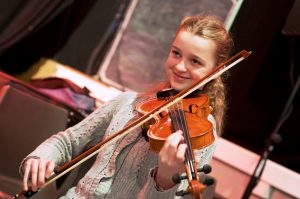 Thea and Laurence are a father/daughter, fiddle and piano duo from Great Malvern in Worcestershire, with strong Orkney routes.

Just 14, Thea has been learning the violin for six years, strongly influenced by her Orcadian musical lineage: her grandfather, Len, made her fiddle and bow in his Kirkwall workshop - and is himself a fiddler, and a great inspiration to her - whilst her great grandfather, Isaac, led the West Mainland Strathspey and Reel Society in the 1960s. Her light, delicate touch, coupled with powerful dynamic expression, demonstrates a deep understanding of the fiddle tradition. She made her debut solo public performance at the age of 12 to great acclaim at The Reel in Kirkwall in 2015, and she was awarded runner up at this festival's Open Stage competition just a year later.

Laurence grew up in Kirkwall during the 1970s and 80s and was greatly influenced by local Orkney musicians of the time. His distinctive piano style delivers lift, driving along the melody with a sympathetic yet energetic rhythmic backing.

Together their growing repertoire combines the fiddle music of Orkney, Shetland, Scotland, Scandinavia, North America and beyond.