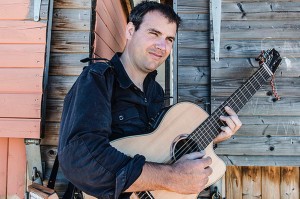 Originally from Broadstairs in Kent, a long time past resident of Dingle, Kerry, and now based in Perthshire, Tim Edey is a multi-instrumentalist and singer of immense repute.

Titled ‘Musician of the Year’ at the 2012 BBC Radio 2 Folk Awards, Tim is renowned for his masterful instrumentals – whether on guitar, melodeon or whistles – and his live solo shows are a stunning mix of world music, virtuosity, passion and unadulterated musical genius.

Tim has toured globally with Sharon Shannon (that name's familiar…), Christy Moore, Cooney and Begley, Mary Black, and Capercaillie, and is currently a special guest member of The Chieftains, and is part of Natalie MacMaster’s North American tours. However, it was some 11 years ago that he was last seen in Orkney – as part of the Scottish fiddle supergroup, Session A9.

“Tim Edey is brilliant – in every which way. As a guitarist he has few peers. As a box player he’s a magician. As a character he’s off the scale.”
Colin Irwin, fRoots

“Tim Edey plays a host of different instruments to a standard us mere mortals can only dream of. Listen and weep.”
The Living Tradition