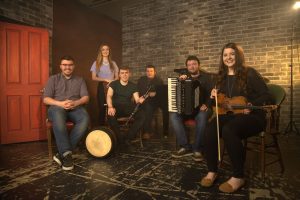 TRIP are a new and energetic trad band based in Glasgow that draw influence from the cultures and traditions of Scotland, England, Ireland and the Isle of Man.

All currently in their second year of study at the Royal Conservatoire of Scotland, they formed in late 2016 after playing together through informal sessions and finding an instant connection through their shared passion for traditional music with a contemporary and modern twist.

Following the release of their first music video in January 2017, the band had a successful year performing across Scotland, the Isle of Man, and in Ireland, where they opened as Sharon Shannon's special guests at her Sligo Live concert.

TRIP are set to make an impact throughout 2018, with further touring the release of their debut EP , Eclipse.