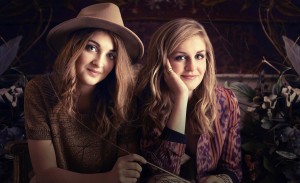 Ward Thomas have fast become one of the most hotly-tipped acts on the UK country scene. Their debut recording, From Where We Stand, was crowned UK Album of the Year at the 2014 British Country Music Awards - having entered the top 20 of the UK album charts the day after its release, the iTunes country chart at number one, and sitting at the top of the UK country chart for five weeks.

Following the sell out success of their co-headline tour with fellow British Country flag flyers, The Shires, critically acclaimed 20-year-old twin sisters, Catherine and Lizzy Ward Thomas, from Hampshire, are undertaking their own headline tours throughout 2015.

It was just a few short years ago, though, and whilst the pair were in sixth form, that a rough demo of Ward Thomas’ song Footnotes found its way into the hands of two respected Nashville session musicians, leading to the recording of their lauded album. One listen to the vocal cadences and close harmonies on this award winning debut, and Nashville and Hampshire suddenly don’t seem all that far apart.

With mainstream festival appearances including Maverick, Jamie Oliver and Alex James’ Big Feastival, and BBC Radio 2’s Festival in a Day, in London's Hyde Park - as well as daytime BBC Radio 2 A-list airplay - Ward Thomas are heralding a new age for Country Music in the UK.


“On raw talent alone (Ward Thomas) could give the best of Nashville a run for its money.”
The Independent